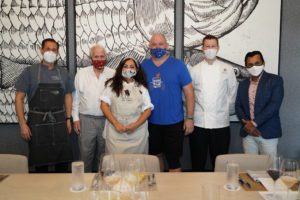 CHEF, the Culinary & Hospitality Education Foundation of Southwest Florida, held three separate events in 2021 to raise scholarship funds for students in Collier and Lee Counties, allowing them to continue their education in the culinary arts and hospitality industries. CHEF Board President Taryn Cafiero announced, “With proceeds from 2021 events, CHEF has raised and distributed nearly $400,000 in scholarships and grants since the organization’s inception.”

In March, the pre-taped competition was shown online, and the 2021 CHEF Showdown winner was announced to the virtual audience by live auction co-host Gina Birch and auctioneer Scott Robertson. Chef Jason Goddard received CHEF’s Golden Whisk as the 2021 Showdown Champion, winning by just four points out of 300.

Last, but not least, a one-of-a-kind “21 on 21 in 21” dinner was presented by CHEF Board Members, Chefs Asif Syed and Brian Roland. Held at 21 Spices by Chef Asif on April 21, 2021, this unique feast featured 21 dishes prepared with stunning ingredients, flavors, and presentation!

CHEF was established in 2004 as a 501 (c) (3) not-for-profit organization with the mission to raise scholarship funds to benefit Collier and Lee County students to pursue their degrees and careers in the culinary arts and hospitality industries. To date, nearly $400,000 in scholarships and grants has been awarded through CHEF’s donor-advised fund administered by the Collier County Community Foundation.