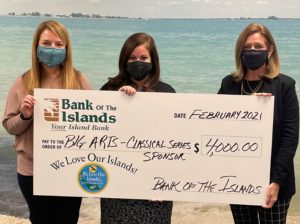 Bank of the Islands has signed on as the first Corporate Sponsor for the Big Arts Classical Music Series.

“Bank of the Islands is happy to join the other sponsors who have made this series a beloved Big Arts tradition,” said Willy Ocasio, the Bank’s Vice President and Sanibel-Captiva Office Manager. “We particularly want to salute Deborah La Gorce who conceived of this series of classical concerts and has financially supported it year after year. It’s an honor to become the first-time corporate sponsor this year.”

Bank of the Islands, a name synonymous with island community banking since 1974, is located at 1699 Periwinkle Way, at the corner of Casa Ybel Road, on Sanibel. The Captiva office is at 14812 Captiva Drive, next to the Captiva Post Office. As the oldest locally owned and managed community bank on the islands, Bank of the Islands is proud to be the winner of 47 “Best of the Islands” awards since 1999, including being chosen the Best Island Bank for 22 years straight.