BIG ARTS Documentary Series Concludes with “The Disappearance of My Mother” 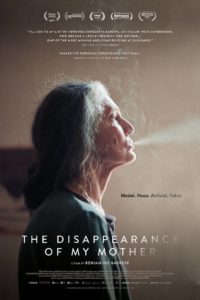 On Wednesday April 28, the final film in the BIG ARTS critically acclaimed Documentary Series is “The Disappearance of My Mother.” The film runs one hour 36 minutes and will be shown in Christensen Performance Hall at 12:30 p.m. After the movie, I will lead a discussion in the theater.

The film is a son’s view of a model parent. Benedetta Barzini, couture star and cultural critic, reluctantly faces her son’s camera in a tender and harsh documentary.  Near the end of the film she says “I hate memory.” In spite of her aversion to nostalgia, her son Benjamino Barrese, manages to smuggle in some material from her past.  She was the first Italian model to appear on the cover of American Vogue.  Barzini now 77, was photographed by the likes of Irving Penn and Richard Avedon. In the 1960s, in New York, she was close to Salvador Dali and Andy Warhol. Later in Italy she was a journalist and educator and a leading feminist voice, a critic of how the media and fashion industries manipulate women’s bodies and experiences.

Now she is hostile to photography, to cinema, to images of every kind, arguing that they distort and “freeze” experience. She barks at her son and  even throws him out of her Milan apartment. It’s easy to sympathize with the filmmaker. He clearly adores his mother and respects her wishes to find peace, but he obviously wants her to stay around for a while longer.

Tickets are $10 and available in advance or on the day of the film at the BIG ARTS box office, located at 900 Dunlop Road on Sanibel. For more information, call 395-0900 or visit www.bigarts.org.

Di Saggau is a member of the BIG ARTS Film Series Committee, past president of the Film Society of Southwest Florida, and feature writer for the “Island Sun” and “The River Weekly” newspapers.