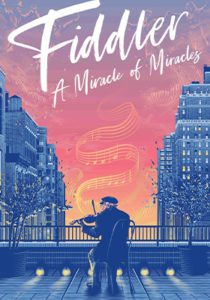 On Wednesday April 21 at 12:30 p.m. BIG ARTS  will show “Fiddler: A Miracle of Miracles”, the third in the critically acclaimed documentary series. The film runs one hour 37 minutes and will be shown in the Christensen Performance Hall.  After the movie I will lead a discussion in the theater.

When “Fiddler on the Roof” opened on Broadway in 1964, it explored themes of tradition, religion, and anti-Semitism against a modern backdrop of radical social change that addressed gender roles, sexuality, and race. The film contains rare archival footage and interviews with musical luminaries and explores the legacy of this long-running, award-winning musical.

This is the first in-depth documentary that chronicles the story of the international Broadway blockbuster “Fiddler on the Roof,” exploring the unexpected richness of its themes as well as its vast reach across time and cultures. The film also includes personal experiences and insights into the show’s timeless impact from “Fiddler on the Roof” composer and lyricist Jerry Bock and Sheldon Harnick as well as commentary from former cast and creative members along with famous fans impacted by the musical, including Joel Grey, Topol, Harvey Fierstein, Harold Prince, Itzhak Perlman, Stephen Sondheim, Lin-Manuel Miranda, and many others. It’s a fascinating, lively look back at Broadway and cinema history.

The remaining film in the series is “The Disappearance of my Mother”, April 28. Tickets are $10 in advance or on the day of the film at the BIG ARTS box office, located at 900 Dunlop Road. For more information, visit www.bigarts.org