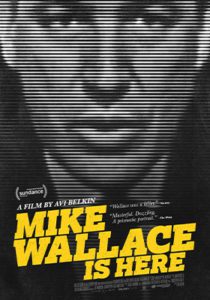 On Wednesday, April 14 at 12:30 pm. Big ARTS will show “Mike Wallace Is Here”, the second film in their Critically Acclaimed Documentary Series. The film runs one hour 34 minutes and will be shown in the Christensen Performance Hall.  After the movie, I will lead a discussion in the theater.

The film takes a look back at Mike Wallace’s career which includes just about anyone who was famous or infamous. And he made some of them squirm as you will see in this absorbing new documentary. This includes Vladimir Putin, Ayatollah Khomeini, Bette Davis, Barbara Streisand, Eleanor Roosevelt and a host of others.

There are also some conversations between Wallace and some of his “60 Minutes” colleagues at the time of his approaching retirement.  We get the feeling he wasn’t happy about it. He gained success when “60 Minutes” premiered in 1968.  One chilling moment in the film is when he is interviewing a U.S. soldier involved in the massacre at My Lai in Vietnam. All of a sudden Wallace asked, “How do you shoot babies?”

The remaining films in the series are “Fiddler: A Miracle of Miracles”, April 21 and “The Disappearance of my Mother,“ April 28.

Tickets are $10 and available in advance or on the day of the film at the BIG ARTS box office, located at 900 Dunlop Road on Sanibel. For more information call 395-0900 or visit www.bigarts.org.

Di Saggau, is a member of the BIG ARTS Movie Committee, Past President of the Film Society of Southwest Florida, and Feature Writer for the Island Sun Newspaper and The River Weekly.