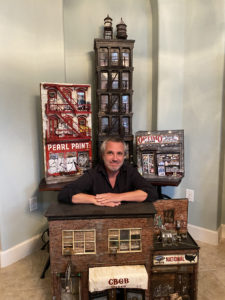 BIG ARTS opens the 2021-2022 Fine Arts season with sculpture artist Alberto Chailosky. Chailosky’s exhibit, “Lost but Not Forgotten,” consists of miniature, mixed-media sculptures that depict important places of Chailosky’s past that, sadly, no longer exist, due to years of gentrification. However, the memories and stories these places held will remain forever within these works. The hope is that by memorializing them in sculpture, their cultural impact is preserved. The exhibit opens on October 22. There will be an artist talk and reception on Friday, November 5, at 5:00 p.m. in BIG ARTS Dunham Family Gallery. A virtual 3D tour of the exhibit will be available online at www.bigarts.org on October 27.

A graduate of RISD and NYU’s Tisch School of the Arts, Chailosky has had an extensive career in the arts as a sculpture artist, graphic designer, and art director, including 11 successful years as a set designer for various Broadway shows and Saturday Night Live. “I have many inspirations from different times in my life. They have inspired me in different ways,” said Cholesky. “My two earliest were when I was a young boy. First was one day after moving to the U.S. and watching color television, I saw magic! It was the opening scene to Mister Roger’s Neighborhood. The camera panned through this amazing miniature city and ended up watching a trolley car, which transitions to Mister Rogers’ house. I get chills to this day watching that scene. The second was also as a young boy a bit later when I saw pictures of Red Groom’s “Ruckus Manhattan.” I also got into miniatures through the theatre world. This led me to one eventful day when I met Hal Prince and he introduced me to one of the greatest set designers of all time, Eugene Lee. Eugene became a major influence, and I assisted him on many Broadway shows and Saturday Night Live.”

For Chailosky, his “Lost but Not Forgotten” exhibit is both a historical trip and an autobiographical adventure of the late ’80s and ’90s. “The very first thing I do when starting a piece is pick the place I want to sculpt and the story I want to tell. I’m not interested in doing random places. My story is just as important as the art. Each sculpture is both a work of art and a piece of my life and a story of me,” Chailosky explained. “It is of places that not only have significant meaning (either socially or architecturally), but also have personal meaning to me where I have experienced life in those places. Each place depicted in my show has another thing in common with one another: These places are no longer around. They have been either torn down or replaced by modern structures, mostly due to gentrification and profit.”

When asked about his upcoming show at BIG ARTS, Chailosky had this to say: “This is my first solo show in a while, and I’m so happy to be doing it at BIG ARTS. They gave me the freedom to do “MY” show. No suggestions, no direction, etc. This was about my story I wanted to tell through my art, and BIG ARTS was as excited to hear and see my story as I was to tell it. This means a lot to me.”

“Lost but Not Forgotten” opens on October 22 in BIG ARTS Dunham Family Gallery located at 900 Dunlop Road, Sanibel. The exhibit will be on display until December 12. For more information, visit BIGARTS.org, or call the box office at 239-395-0900.

BIG ARTS, established in 1979, is a nonprofit organization devoted to providing quality artistic, cultural, and educational experiences to Sanibel and Captiva residents and visitors. Visit www.bigarts.org to learn more about BIG ARTS. Stay tuned for our 2022 season, and don’t forget to visit us on Facebook!