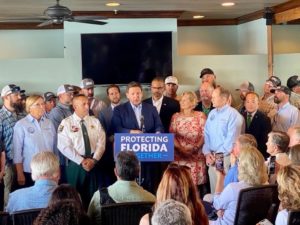 Gov. Ron DeSantis’ announcement that he vetoed Senate Bill (SB) 2508, made just minutes before, lent a celebratory mood to the June 8 business luncheon meeting of the Sanibel & Captiva Islands Chamber of Commerce at the Marriott Sanibel Harbour Resort in Fort Myers.

One could call it “poetic justice” that the scheduled speakers for the meeting were water-quality authorities Eric Eikenberg, CEO of The Everglades Foundation, and Chauncey Goss, board chair of the South Florida Water Management District. The two were on the docket to speak at an earlier meeting in February when the luncheon was canceled, and many involved dropped everything to head to Tallahassee to oppose the sudden appearance of SB 2508 on the political horizon.

“Some days, water quality advocacy is frustrating, like when you need to cancel a chamber water-quality lunch, travel to Tallahassee, and speak for 2 minutes or 20 seconds to oppose a horrendous bill that was introduced in a manner that gave one opportunity for public input on extremely short notice,” said John Lai, chamber president and CEO. “Then there are days like today, when that bill gets vetoed by the governor on the same day that the water-quality lunch is rescheduled. I love these days and the great organizations that we get to collaborate with.”

The lunch was co-hosted by the Florida Restaurant and Lodging Association (FRLA) and co-sponsored by Bailey’s General Store and Captains for Clean Water. The latter headed up the last-minute efforts to block the passage of Big Sugar-skewed wording in SB 2508 in February and organized the June 8 press conference at Doc Ford’s Rum Bar & Grille on Fort Myers Beach, where the governor made his announcement.

“There were some things, some policy stuff, that were done during this legislative session – one of the bills that I know a lot of people were asking about, this 2508, it was going to try to change some of the stuff that was being done,” said Gov. DeSantis. “And I just want to let you know that 2508, we have vetoed that today.”

The announcement, met with anonymous applause, came during the governor’s 30-minute speech about a new state budget, which strikes some high notes for conservation efforts, including more than a billion dollars in funding for the Everglades and $35 million to alleviate blue-green algae and red tide issues.

Captains for Clean Water co-founder Chris Wittman announced the governor’s veto at the chamber luncheon. “Today is a monumental day for clean waters in Southwest Florida,” he told the gathering of about 110 chamber and FRLA members. “When we are vocal, we see progress, and we see change. It was because of your voices and your ferocity that the governor vetoed that bill. Thank you for your commitment to our waters and your advocacy.”

Eikenberg called it “a special day not only for the local economy here in this part of Florida but also for our beloved Everglades, our Caloosahatchee estuaries, and all these critical habitats.” He reported that the “crown jewel” 32-foot reservoir south of Lake Okeechobee will be finished in 2029. “This is the decade for Everglades restoration,” stemming from a 30-year commitment. “We’re in the third and final decade,” he added.

Sanibel resident Goss commented that “probably most of the people in this room went to Tallahassee,” in February, and commended the current chamber administration for taking a strong water-quality advocacy stance for the first time in chamber history. “There was a void there, and it’s just made such an incredible change,” he said. “I think back 15 years ago when SCCF and the chamber wouldn’t even talk to each other. They were probably suing each other. Now we’re working together… Today’s the culmination of that.”

Goss went on to report about the progress of various projects leading to the end goal of fewer harmful algal blooms, a situation that has seen improvement in past years due to regulated discharges from Lake Okeechobee and grassroot movements.

“So many chamber members and islanders made a stand in Tallahassee in February,” said Lai, who was among constituents who made the pilgrimage. “This is a sweet victory for us all. This is why we advocate so heavily as an organization representing the business community. Our Government Affairs Committee has prioritized water quality as the number one threat to our businesses. SB 2508 caught us by surprise, but our community’s response to our calls to action and our ability to mobilize quickly proved that we remain vigilant.”

The Sanibel & Captiva Islands Chamber of Commerce is dedicated to promoting the prosperity of its members and preserving the quality of life of our community. With more than 460 active Chamber members from both islands and businesses from Lee and Collier counties, the Chamber plays a key role in facilitating communication and cooperation between business, residents, and government to enhance the economic health of the islands. The Francis P. Bailey, Jr., Chamber Visitor Center is located at the entrance to Sanibel Island and welcomes tens of thousands of visitors each year. VISIT FLORIDA named the visitor center one of 13 official Florida Certified Tourism Information Centers in the state. It is open 365 days a year and provides comprehensive information about things to do, places to visit, and where to stay, shop, and dine. The chamber website sanibel-captiva.org receives more than 1.3 million website visits per year.