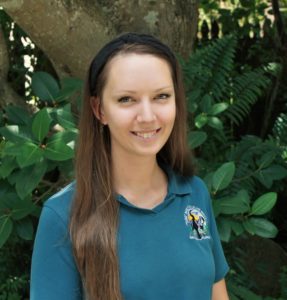 The “Ding” Darling Wildlife Society-Friends of the Refuge (DDWS) has promoted Sierra Hoisington to the position of associate executive director of the nonprofit organization that supports the J.N. “Ding” Darling National Wildlife Refuge on Sanibel Island. Hoisington began working for DDWS in 2016 and most recently served as development officer. She fills a position vacated by Lynnae Messina at the end of 2021.

“It was important for me to find a replacement with the knowledge, maturity, and experience to take on the role,” said Birgie Miller, DDWS executive director. “The first thing I did was look within our current team and realized I had the right person for this role.”

Originally from Tega Cay, S.C., Hoisington graduated from Clemson University in South Carolina with a bachelor’s degree in wildlife and fisheries biology. She assisted Clemson as a wildlife technician on bat research in the Nantahala National Forest. Before arriving to “Ding” Darling in September 2016, she worked for the National Wildlife Refuge Association at Okefenokee National Wildlife Refuge in Georgia.

As part of the DDWS staff, Hoisington took charge of photography contests, lecture and film series, and special exhibitions. With refuge ranger Toni Westland, she led the recent project to build and develop the WoW (Wildlife on Wheels) mobile classroom that travels throughout the area to extend the refuge education outreach mission to underserved communities.

During her tenure with DDWS, Hoisington has completed courses at the Indiana University Fund Raising School of Philanthropy, the Kellogg School of Business in Illinois, the University of Notre Dame in Indiana, and several courses at the National Conservation Training Center (NCTC), a U.S. Fish & Wildlife (USFWS) facility in West Virginia.

“I am so excited to be the ‘Ding’ Darling Wildlife Society’s new associate executive director,” Hoisington said. “’Ding’ has been my home for nearly six years now, and I couldn’t imagine working with a more supportive, creative, and altruistic group of people. The work we are doing here at the refuge and in our communities off the island ensures everyone gets a chance to be a part of the conservation conversation. I’m excited to help continue this important work.”

“Sierra’s time with DDWS has given her the ability to understand the nuances of working with the USFWS and abiding by the partnership agreement between the two entities,” said Miller. “Having worked with USFWS staff around the state and nation on the WoW and urban outreach initiatives, Sierra is known and respected by her government peers at ‘Ding’ Darling and within the overall system. She recognizes and embraces the importance of collaboration and teamwork. We are so happy she has accepted this position as my ‘right-hand staffer.”

To support DDWS and the refuge with a tax-deductible gift, visit dingdarlingsociety.org or contact Birgie Miller at 239-472-1100 ext. 4 or [email protected].