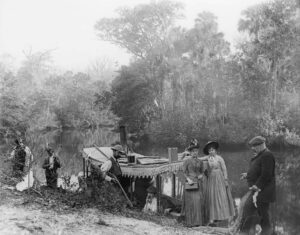 The ninth annual “Ding” Darling Wednesday Film Series kicks off its biweekly showings this winter with a schedule of seven films from Jan. 20 through April 14. The films explore natural topics — from the world’s largest and rarest bird of prey, and conservation activist Rachel Carson; to food waste, and man’s interference with the Florida Everglades.

One of the season’s highlights, The Swamp, on Feb. 3, chronicles repeated efforts to transform the Florida Everglades into an agricultural and urban paradise, ultimately leading to a passionate campaign to preserve America’s greatest wetland.

In honor of International Women’s Day in March, A Sense of Wonder celebrates the life and conservation achievements of Rachel Carson, whose book Silent Spring drew attention to the tragic effects of pesticides on wildlife.

“Ding” Darling Wildlife Society-Friends of the Refuge hosts the free film showings in the “Ding” Darling Visitor & Education Center with sponsorship from Sanibel Captiva Beach Resorts (SCBR). Seating is distanced, limited, and on a first-come basis.

Below are the season’s scheduled films. All films begin at 1 p.m. A short discussion will follow each film to allow visitors to gain more from their documentary-viewing experience by listening to other people’s points of view and analyzing what they just watched. For more information, visit dingdarlingsociety.org/articles/lecture-and-film-series.

March 3 – A Sense of Wonder