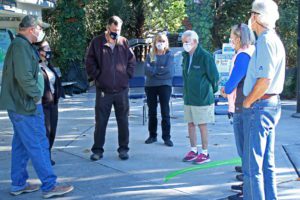 Representatives from the “Ding” Darling Wildlife Society-Friends of the Refuge (DDWS), along with refuge staff, gathered outdoors and informally on Wednesday, Jan. 6, to bid farewell to and honor the accomplishments of Paul Tritaik, recently retired refuge manager for the J.N. “Ding” Darling National Wildlife Refuge on Sanibel Island. His retirement on Sept. 30, 2020, ended 12 years of service at “Ding” Darling and a career with the U.S. Fish & Wildlife Service that spanned 38 years.

DDWS representatives presented Tritaik, with mementos of his time at “Ding” in appreciation for his service and many accomplishments at the refuge. Supervisory refuge ranger Toni Westland talked about some of those accomplishments, which included such highlights as the release of oil-spill victimized birds in 2010 after the BP disaster, unveiling new manatee and crocodile-alligator exhibits in the Visitor & Education Center, opening the Wildlife Education Boardwalk in 2013, installation of the Perry Tract beach life exhibit and restoration of Bailey Tract project in 2017, completion of solar paneling on refuge buildings, accepting the America’s Best Restroom Award and inaugurating Boy Scout Badge University in 2018, overseeing three major land acquisitions amounting to more than 80 acres, plus a number of improvements to the refuge campus since he took leadership in 2008.

DDWS immediate past president Mike Baldwin and executive director Birgie Miller joined Sarah Ashton, who, as the new president, thanked Tritaik for establishing a strong and healthy relationship with the community.

“I’m so appreciative, as the new president, to be stepping into a role where the refuge and society are so well-regarded by the conservation community here and around the country,” said Ashton.

“When Paul made his formal announcement back in September, we had postponed having a real celebration due to COVID,” said DDWS executive director Birgie Miller. “But the delays continued with COVID, and we just made the decision to celebrate on a much smaller scale similar to how so many people around the country have had to cancel or reimagine their weddings, graduations, birthdays, and retirement parties. Although our gathering necessarily was small, it sent a powerful message about our respect for a truly great part of ‘Ding’ Darling history.”

“I was fortunate to work with a great staff, great friends group and volunteers, great recreation concession, and a great supportive community on Sanibel,” said Tritaik. “Together we accomplished a lot from land acquisition to habitat restoration to new and improved facilities to expanded education and wildlife-oriented recreation.”

Tritaik began his career in September 1982 at Patuxent Wildlife Research Center in Maryland, working mostly with bald eagles and Andean condors. He then moved on to Okefenokee National Wildlife Refuge in Georgia as an outdoor recreation planner refuge ranger in 1989, where he helped run visitor services.

“It was my dream to work for the U.S. Fish & Wildlife Service and an honor to work at some of the most exceptional and historic places in the refuge system,” said Tritaik. “To work on Sanibel the last 12 years and raise our son here has truly been a blessing for me and my wife. We appreciate all of the support we have received over the years, and we look forward to continuing our friendships in this one-of-a-kind community.”

Kevin Godsea, who has been serving as acting refuge manager during much of Tritaik’s regional detail, will continue to serve in that position until a new permanent manager is appointed. Godsea, who once worked under Tritaik as supervisory refuge ranger at “Ding” Darling, also currently serves as refuge manager for Florida Panther and Ten Thousand Islands national wildlife refuges in the Everglades.

“This is such a bittersweet moment for us,” said Mike Baldwin, DDWS immediate past president. “Paul has shown us extraordinary, brilliant leadership in the past dozen years and is deeply missed by all associated with the refuge and friends group. At the same time, we are happy to see he has reached a much-deserved opportunity to sit back with his family and look back at a fulfilling, purposeful career serving our nation’s conservation mission in the most meaningful way.”