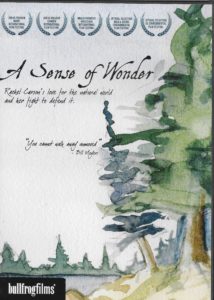 The ninth annual “Ding” Darling Film Series will adapt to distancing and pandemic safety protocols with virtual airings and follow-up discussions via Zoom. Pre-registration for the four films will be required. Watch dingdarlingsociety.org/articles/lecture-and-film-series for details and wine-pairing suggestions for the films from Bailey’s General Store wine buyer Calli Johnson.

The series kicks off on Jan. 20 with the film Smog of the Sea. The 30-minute documentary follows a group of marine and citizen scientists who, while researching the ocean’s storied plastic garbage patch, discovers the more serious problem of pervasive microplastics that “smog” the water and sicken marine and human life.

On Feb. 17, the 94-minute Bird of Prey documentary explores the plight of the rarest eagle on earth, the great Philippine eagle, with stunning, exclusive film footage of the critically endangered species.

Environmental pioneer Rachel Carson is the topic of A Sense of Wonder, to air March 8, in honor of International Women’s Day. The 54-minute film depicts Carson as she reminisces about the impact of her landmark book, Silent Spring, which drew attention to the tragic effects of pesticides on wildlife when it published in 1962.

From farm to fridge, Just Eat It delves into the modern problem of food waste in the United States. The 75-minute documentary airs April 12.

“Ding” Darling Wildlife Society-Friends of the Refuge hosts the free film showings with sponsorship from Sanibel Captiva Beach Resorts (SCBR). Below is the schedule of the season’s films.

Discussions that follow each film allow visitors to gain more from their documentary-viewing experience by listening to other people’s points of view and analyzing what they just watched. For more information, visit dingdarlingsociety.org/articles/lecture-and-film-series.

Monday, March 8 – A Sense of Wonder