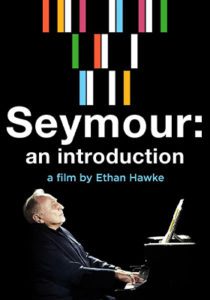 Starting Wednesday, April 7, at 12:30 p.m. the critically acclaimed Documentary Series will begin in Christensen Hall at BIG ARTS. The documentaries are thought-provoking, eye-opening and entertaining.  I will give a brief introduction before each film and a discussion with the audience  will follow. In selecting the films, I look for not only entertainment but for films that offer you an inside look into either the person or the subject matter.

The first film April 7, is “Seymour: An Introduction.” It’s about Seymour Bernstein, a classical pianist in his 80s, who at the midpoint of his career at age 50, gave up public performances and became a teacher of piano instead. Ethan Hawke directed the film and does a few interviews with Seymour. We learn his life story, his perceptions on art, and his philosophy on life in general. The two met when seated next to each other at a dinner party.

The second film on April 14, is “Mike Wallace Is Here.”  If they were famous or infamous, they likely sat across from newsman Mike Wallace at some point during his seven-decade career. Relying exclusively on archival footage, the film interrogates the interrogator, tracking Mike’s storied career and troubled personal life while unpacking how broadcast journalism evolved to today’s precarious tipping point.

The third film. April 21, is “Fiddler: A Miracle of Miracles.” It tells the origin story behind one of Broadway’s most beloved musicals, “Fiddler on the Roof”, and its creative roots in early 1980s New York, when “tradition” was on the wane as gender roles, sexuality, race, relations and religion were evolving.  It’s a very fascinating, lively look back at Broadway and cinema history.

On April 28, the final film is “The Disappearance of my Mother.”  Bernetta Barzini, was the first Italian model to appear on the cover of American Vogue. Barzini, now 76, hobnobbed with Salvador Dali and Andy Warhol. In Italy working as a journalist and an educator she became a leading feminist voice. The once iconic fashion model wants to escape the world of images, but her son’s insistence on making a final film about her brings about an unexpected collaboration and confrontation with the camera’s gaze.

Tickets are $10 and available in advance or on the day of the film at the BIG ARTS box office, 900 Dunlop Road on Sanibel, and at www.bigarts.org. For more information call 395-0900.

Di Saggau is a member of the BIG ART’s Film Committee and Feature Writer for the Island Sun Newspaper and The River Weekly.

BIG ARTS, established in 1979, is a nonprofit organization devoted to providing quality artistic, cultural and educational experiences to Sanibel and Captiva residents and visitors. Visit www.BIGARTS.org to learn more about our 2021 Season, and don’t forget to visit us on Facebook!