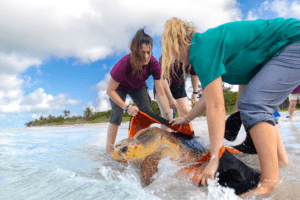 The first Loggerhead Sea Turtle (22-1436) was admitted on April 8 from Bonita Springs after she was found floating with over two feet of monofilament line extending from her cloaca. Further examination revealed a large fishing hook internally and hospital staff monitored her closely in hopes she would pass it on her own. Unfortunately, the hook wasn’t moving and veterinarians scheduled her for hook removal surgery. During surgery, veterinarians found the hook had punctured through the gastrointestinal tract, and they carefully removed the hook before closing the surgery site. After surgery, the turtle was still suffering from some buoyancy issues and rehabilitation staff fixated weights on her shell to help her pass any gas causing her to float. She was still floating weeks later so a CT scan was scheduled to evaluate internal health and treatment decisions moving forward. The scan revealed she had a collapsing lung and free floating air in the body cavity so she underwent another surgery to suction out the air and her own blood was used to form a patch to seal the lung tear.

The second Loggerhead Sea Turtle (22-1935) was admitted from Everglades City on April 28 after she was found floating with deformaties. Upon examination, she had several abrasions, lesions, and lacerations all over her body with heavy algae and barnacle growth on her shell. Additionally, her shell and flippers were deformed potentially from some type of entanglement during her development. Radiographs confirmed she was suffering from pneumonia and gas trapped in her intestines which could have resulted in her buoyancy issues. She was also scheduled for a CT scan which confirmed the presence of pneumonia. Hospital staff continued to provide supportive care under close monitoring.