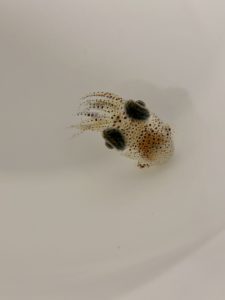 In early July, ten Hummingbird Bobtail Squid, Euprymna berryi, arrived at the Bailey-Matthews National Shell Museum from Woods Hole Marine Biological Laboratory, along with a clutch of viable eggs. While the adult Bobtail Squid went directly on exhibit, the clutch of eggs stayed in quarantine and, sixteen days after their arrival, they began to hatch.

Now, eight weeks later, the young squid are about the size of a pea. These tiny, compact cephalopods have eight arms, two tentacles, and large eyes. Their background color appears translucent, with several tiny chromatophores distributed over the entire body.

“The Hummingbird Bobtail Squid are actively hunting on their own and displaying normal coloration and behaviors,” explains Carly Hulse, National Shell Museum Senior Aquarist. “We are very pleased with their progress, but they will have to get a little bigger before we can display them on exhibit.”

In recent years, Bobtail Squid have become important subjects in biological research. Be sure to check out the adult Hummingbird Bobtail Squid currently on exhibit at the Bailey-Matthews National Shell Museum.