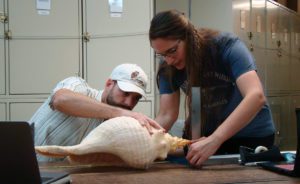 In April of 2022, Museum research colleague Dr. Greg Herbert (University of South Florida, Tampa) and collaborators published a much-awaited peer-reviewed article on the status of the Horse Conch, Triplofusus giganteus. In the article, they offer – for the first time – an estimate of the age at which Horse Conch females reproduce, and conclusions about the growth rate and lifespan of the species. These findings, in combination with current species distribution studies and analysis of Horse Conch shells (including those in the Bailey-Matthews National Shell Museum collection) led the authors to a consequential and science-based conclusion that the iconic mollusk (the Horse Conch has been the Florida state shell since 1969) is under threat and stronger conservation steps are needed.

The authors used stable oxygen and carbon isotopes sclerochronology (the dating of hard biological structures such as bones, corals, and shells) to garner information on Horse Conch life cycles. Among other samples, included in their study were two large specimens from the BMNSM collection, measuring 460 and 475 mm (about 18 and 19 inches).

These two behemoths were estimated to be 13 and 11 years old at time of death. Based on those data, the world record Horse Conch (on display at the Museum), which measures 606 mm (23.9 inches), would have lived only 16 years. These are much shorter lifespans than previous age estimates, which had only been guessed from large shell sizes. Herbert and collaborators also conclude that females mature later in life and have fewer spawning events than originally thought. This would make the species particularly susceptible to overharvesting, as the large size of the reproductively fit females makes them more attractive and likely to be collected (Horse Conchs are harvested mostly for their large shells).

There is no limit for commercial harvest of Horse Conch in Florida. The authors conclude that inclusion of the species on the list of protected marine life would limit the recreational harvest of the species and help conserve its populations in the Sunshine State. In addition to the obvious value of the article from the standpoint of the Horse Conch’s biology and conservation, use of large, preserved shells from the National Shell Museum is another demonstration of the value of natural history collections.