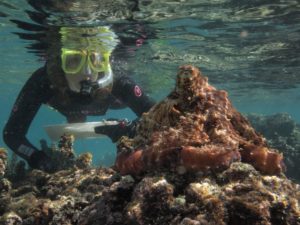 Following the positive response to its 2021 11-session online lecture series, the Bailey-Matthews National Shell Museum proudly announces its 2022 Season Lecture Series, which will be held in-person.

The Sanibel Captiva Trust Company is the Presenting Sponsor of the series.

All lectures will be held at the Museum with the exception of the February 1st talk by Sy Montgomery, author of The Soul of an Octopus, which will be held at The Community House on Sanibel.

Visit ShellMuseum.org for more information and to register.

“The Sound of the Sea: Seashells and the Fate of the Oceans”

In a special program for the Bailey-Matthews National Shell Museum where the idea for her newly-released book The Sound of the Sea: Seashells and the Fate of the Oceans was born, award-winning environmental author Cynthia Barnett gives an inside look on her six-year journey researching the profound relationship between humans and seashells. Traveling from Florida to the Bahamas to the Maldives, West Africa, and beyond, Barnett explores the ancient history of shells as global currency, their use as religious and luxury objects, and the rarely appreciated but remarkable creatures that make them.

“The Soul of An Octopus”

This lecture is made possible by Fran Peters and Island Vacations

In her three years of research for her best-selling book The Soul of an Octopus (2015), National Book Award finalist Sy Montgomery established such close friendships with Giant Pacific Octopuses that the animals would rise from their tanks to greet her, and then embrace her. Sy’s talk shares details of these extraordinary relationships, as well as surprising scholarly research revealing octopuses’ remarkable intellectual abilities as they solve puzzles, communicate through color and shape, and play with people and toys. Pursuing these solitary shape-shifters – creatures with no bones, three hearts, and blue blood – Sy examines the many kinds of possible minds, the mystery of consciousness and the nature of love.

“Shell Trumpets: The Sound Heard Around the World”

One of the world’s most widespread, enduring, and beautifully designed musical instruments was not made by human hands – it is the elegant shell of various types of conchs. Humble but majestic, at once both practical and mystical, conch trumpets have been used for millennia to signal, convey power, accompany spiritual practice, and make music. This talk by Dr. Bradley Strauchen-Scherer, Curator in the Department of Musical Instruments at the Metropolitan Museum of Art (New York), who will be joined by National Shell Museum Science Director and Curator Dr. Jose H. Leal, explores the timeless art and artistry of shell trumpets.

Every night the largest animal migration on earth takes place in the oceans of the world, with marine life emerging from the depths under cover of darkness to feed. This creates opportunity for divers and underwater photographers looking for something new and unique; a “blackwater dive” means diving at night in the deep ocean and searching for subjects to observe and photograph.,

Linda Ianniello will describe her experiences diving miles off the coast of Southeast Florida, and the wide diversity of sea life she has encountered and photographed.  Her talk will have a special focus on mollusks, including those featured in a special exhibition of blackwater photographs by Linda and Susan Mears Black Water Moments: Nocturnal Photography of Open-Ocean Mollusks, on view at the Museum December 10, 2021 – May 30, 2022.

“Paradise Considered: Photographs of Nature and Change in Southwest Florida”

A Conversation with Andrew West, Photographer / Multimedia Journalist with The News-Press

The nature of Southwest Florida is stunning and unique in its power to inspire the devotion of residents, influence the economy and government, and attract millions of visitors from around the world. It is also constantly changing and increasingly at risk as a result of both natural processes and man-made factors. For over 20 years, Visual Journalist Andrew West has documented the beauty, complexity, and important events of the region’s natural world as a photographer for The News-Press.

In conversation with the audience and National Shell Museum Executive Director Sam Ankerson, Andrew will share some of his most compelling photographs and the stories, events, and issues behind them. This program is in conjunction with the special exhibition Red, Blue, Green: An Introduction to Water Quality in Southwest Florida featuring several of Andrew’s photographs, on view at the Museum from January 15 to June 10, 2022.