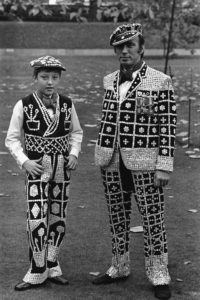 Beginning on June 25th, the Bailey-Matthews National Shell Museum will offer a new exhibition titled Adorned by the Sea: Shells in Fashion.

Throughout time and around the world, shells have been used to elevate and adorn. From ancient cultures to contemporary runway couture, using shells as decorative motifs, carving them into ornamental shapes, and even attaching them in their natural form has transformed ordinary textiles into extraordinary garments. Shells have been used to represent value, nature, and even faith. Adorned by the Sea examines the diverse uses of sea shells and mollusks to enhance appearance and dress.

From the most expensive purple dyes made from snails to the most conceptual catwalk fantasies made of razor clams and mussels, with works spanning centuries and including a wide variety of designers from unnamed indigenous artists to Christian Dior, Alexander McQueen, and Gucci, Adorned by the Sea offers a complete overview of how we have amplified our own image by borrowing from the wonders of marine life.

“From domestic utility to commerce to art, people have purposed and admired shells for thousands of years” said Sam Ankerson, Executive Director of the National Shell Museum. “This eye-opening visual voyage demonstrates their presence and influence in fashion from ancient Egypt to contemporary Paris.”

Adorned by the Sea will be on view through November 28th in the second-floor special exhibition galleries of the Museum during regular Museum hours with paid admission. Also on view June 25 – November 28 is the new exhibition Mollusk Hospital: A Shell Folk Art Journey in 20 Rooms.

Adorned by the Sea is made possible by a grant from the Cornelia T. Bailey Foundation and a gift from Mark and Kathy Helge.