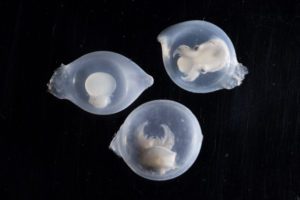 The Bailey-Matthews National Shell Museum’s free online lecture series continues on July 13th at 5:30pm with Let’s Get Kraken: Cephalopods Coast to Coast. The talk will be led by Bret Grasse, Manager of Cephalopod Operations at the internationally renowned Marine Biological Laboratories in Woods Hole, MA.

Cephalopods, which include octopuses, cuttlefish, squids and nautilus, have long fascinated humans. For centuries, they have provided rich inspiration for our human culture through art, history and fables, technology, and media.

Cephalopods are an evolutionary oddity that include many incredible physical and behavioral capabilities, unique to life on this planet. They have the largest and most complex brains of any invertebrate, they have unmatched ability to change the color and texture of their skin, they are the fastest aquatic invertebrates, and they can regrow or regenerate entire limbs. This talk will focus on what makes cephalopods so impressive while discussing their presence and role in public aquariums and research communities.

Speaker Bret Grasse has over 15 years of experience in the public aquarium industry. Bret served as Senior Aquarist at the Monterey Bay Aquarium for nearly 10 years. During his tenure there, Bret created and supervised the world’s first ever large-scale cephalopod show, called Tentacles, featuring a diverse collection including 25 species of octopus, 15 species of squid, 10 species of cuttlefish, and nautilus. Part of this work also incorporated the display of several deep-sea cephalopods including vampire squid, glass squid, and flapjack octopus among others. He has been featured in films such as National Geographic’s Man vs. Octopus and BBC’s The Octopus in My House as well as consulted for documentary series like BBC’s Tiny World, Blue Planet II, and Planet Earth III (future production).

In 2017, Bret joined the Marine Biological Laboratories where he continues to work with cephalopods in a world-class laboratory setting. The primary goal of this mission is to develop sustainable cultures of multiple cephalopod species and work with MBL scientists and educators to promote the use of these animals for research, education, and the conservation of our oceans.