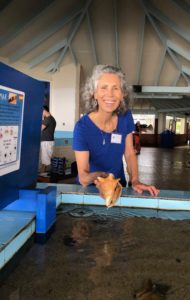 The Bailey-Matthews National Shell Museum announces a summer and fall lecture series, which will be offered live via Zoom and free for registrants.

Lectures and dates are as follows:

Chameleons are frequently touted as having spectacular camouflage skills, but they pale in comparison to the abilities of many mollusks. Some have evolved spectacular shells that don’t just act as a hard barrier, but also help them avoid being seen in their natural surroundings. Cephalopods (such as octopuses) are the real kings of camouflage, with the ability to change shape and texture and some mollusks, such as nudibranchs, are armed with toxic defenses towarn  potential predators. Learn more about (and see!) the fantastic adaptations many mollusks have evolved to deter detection.

Cephalopods, which include octopuses, cuttlefish, squids and nautilus, have long fascinated humans.  For centuries, they have provided rich inspiration for our human culture through art, history and fables, technology, and media. Cephalopods have the largest and most complex brains of any invertebrate, , they are the fastest aquatic invertebrates, and they can regrow or regenerate entire limbs, among other amazing characteristics.  This talk will focus on what makes cephalopods so impressive, and their presence and role in public aquariums and research communities.

Mobilizing Millions of Mollusks of the Eastern Seaboard: August 11, 5:30pm

Mobilizing Millions of Mollusks of the Eastern Seaboard (ESB) is a collaborative project sponsored by the National Science Foundation (NSF).

The ESB Project involves 17 of the largest mollusk collections in the US and combines geographic and other data of over 4.5 million individual specimens from the Atlantic and Gulf States, which will ultimately be made available through online public platforms. Adding map coordinates to records for live-collected mollusks in natural history collections  provides detailed knowledge of species distributions, andthese records can help track distributional changes over time dating to the mid-1800s,  helping to inform better fisheries and conservation management. Drs Leal and Bieler will discuss the project advances and the expected outcomes from this multifaceted cooperative effort.

Conservation aquaculture is the farming of fresh and saltwater plants and animals for restoration and food. During this presentation, Dr. Davis will discuss Queen Conch aquaculture, which has been her focus for the past 40 years. Conchs are a cultural icon of Florida, The Bahamas and the Caribbean where they are found in the shallow seagrass beds and sandy flats. They are known for their beautiful pink lipped shell and harvested as a fishery species for delicacies such as conch chowder, fritters, and salad. Dr. Davis will explain the life cycle of the Queen Conch, the Conch fishery, and how FAU Harbor Branch has joined with Caribbean partners and communities to aquaculture the Queen Conch for the sake of the species, the ecosystem, and the people who depend on the fishery.

The land snail and slug fauna of Los Angeles County, like that of many other metropolitan areas, is under-surveyed and under-studied. To address this shortfall, in 2015 the Natural History Museum of Los Angeles County began a citizen community science project called SLIME (Snails and Slugs Living in Metropolitan Environments), focused on the terrestrial malacofauna from Southern California. As of early 2022, there have been more than 18,000 observations added to the project and approximately 100 species documented, including  first occurrence records for several species in Southern California. The project has engaged students, museum associates and members, and other community groups. The success of SLIME has been replicated elsewhere in the U.S., including in Atlanta, Georgia and Seattle, Washington. In this talk, Dr. Vendetti will share insights of building a successful citizen science movement in the nation’s largest urban area, and surprising discoveries about land snail and slug species in Los Angeles.

“The Museum is glad to present this series of free lectures that illuminates diverse and ground-breaking manifestations of contemporary science, conservation, and community-building initiatives around mollusks and their ecosystems,” said Sam Ankerson, Bailey-Matthews National Shell Museum Executive Director.

The 2022 Summer and Fall Lecture Series is made possible by a gift from Mark and Kathy Helge.

To register and to watch recordings of previous lectures, please visit ShellMuseum.org/lecture-series.