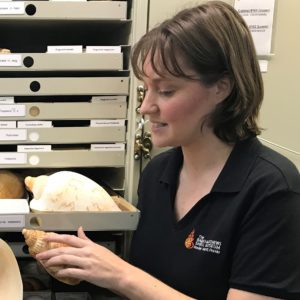 The first talk in the series, Spot the Mollusk!, will be hosted live via Zoom on Thursday, June 16th, at 5:30pm, by the Museum’s Senior Marine Biologist Rebecca Mensch, MS.

Chameleons are frequently touted as having spectacular camouflage skills, but they pale in comparison to the abilities of many mollusks. Some species have evolved spectacular shells that don’t just act as a hard barrier, but also help them avoid being seen in their natural surroundings. The cephalopods (such as octopus) in particular are the real kings of camouflage, with the ability to change not just shape and texture, but also individual pigment cells. Some mollusks, such as nudibranchs, take a different approach. Armed with toxic defenses, they advertise their presence as a warning to potential predators. Attendees to Spot the Mollusk! will learn  about the fantastic adaptations many mollusks have evolved to deter detection.

Speaker Rebecca Mensch completed her B.S. in Marine Biology from Florida Institute of Technology. She completed her Master of Applied Science with Honors from Auckland University of Technology. During her eight years with the National Shell Museum, Rebecca has led educational programming, conducted research on local marine mollusks, and worked with the Museum’s specimen shell and live mollusk collections.