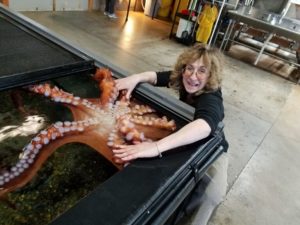 In January, the Bailey-Matthews National Shell Museum launched its 2022 Season Lecture Series. The second talk in the series will be held at the Community House on Sanibel Island on Tuesday, February 1, 5:30pm, featuring New York Times best-selling author Sy Montgomery. Sy will be discussing her 2015 book The Soul of An Octopus, for which she was a National Book Award finalist.

In three years of research for The Soul of An Octopus, Sy established such close friendships with Giant Pacific Octopuses that the animals would rise from their tanks to greet her, and then embrace her with hundreds of powerful, white suckers – all while looking her directly in the eye and turning color. Sy’s talk shares details of these extraordinary relationships, as well as surprising research revealing octopuses’ remarkable intellectual abilities as they solve puzzles, communicate through color and shape, and play with people and toys. Pursuing these solitary shape-shifters – creatures with no bones, three hearts, and blue blood – Sy examines the many kinds of possible minds, the mystery of consciousness and the nature of love.

Researching articles, films, and her 30 books for adults and children, Sy has been chased by an angry silverback gorilla in Rwanda, hunted by a tiger in India, and swum with piranhas, electric eels and pink dolphins in the Amazon. Her work has taken her from the cloud forest of Papua, New Guinea to the Altai Mountains of the Gobi. For The Soul of An Octopus, she not only befriended octopuses at the New England Aquarium but also scuba-dived and snorkeled with wild octopuses in Mexico and French Polynesia.

“The Soul of An Octopus is a beautiful book that’s really changed how its readers understand and appreciate octopuses,” said Sam Ankerson, Executive Director of the National Shell Museum. “Nearly every day at the Museum at least one visitor cites Sy’s book as an influence, and we’re delighted and honored to host her for this special talk.”

Sy’s lecture is made possible by Fran Peters and Island Vacations. The Sanibel Captiva Trust Company is the Presenting Sponsor of the 2022 Season Lecture Series.

The cost to attend is $35 per person (or $30 for Museum Members, memberships to be confirmed upon registration). Book sale and book signing will follow the talk. Refreshments, wine, beer, and snacks are included with event admission. Registration required at ShellMuseum.org/in-person-lectures.