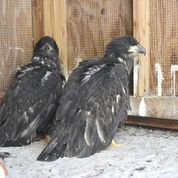 The Clinic for the Rehabilitation for Wildlife (CROW) released a pair of juvenile bald eagles in Cape Coral, Florida on Friday after they recovered from wing injuries and .

The first eagle was rescued on March 13, after it fell from its nest in Bokeelia, Florida. The nestling was underweight and had a heavy parasite load of feather lice.  Radiographs revealed a fracture of its major metacarpal bone in the right wing that was well-aligned. Ten days later on March 23, another nestling bald eagle was admitted after falling from the same nest. It was reported that the nest was falling apart and no adult eagles had been observed in the area for some time. The second nestling was severely emaciated and also had a feather lice infestation. Its radiographs showed fractures of both the major and minor metacarpal bones in its left wing.

“Thankfully, the injuries to the wings required minimal help to heal,” says Dr. Sasha Troiano, a veterinary intern at CROW. “The first eagle didn’t need any splinting to heal on its own, while the second one required a splint for about a week before the fractures were healed enough for it to be removed.”

After another month of rehabilitation, both eagles were flying and had reached a healthy weight. Veterinarians gave them a clean bill of health and at the direction of U.S. Fish and Wildlife officials, the eagles were released at an active nest site in Cape Coral, Florida.

“Since the juveniles are in non-threatening plumage, it’s not uncommon for them to associate with another eagle nest site,” says Resee Collins, Eagle & Rehabilitation Permit Coordinator for USFWS. “It also provides the young birds with additional opportunities for learning ‘eagle life’.”