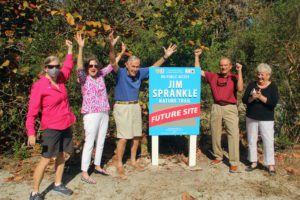 Jim Sprankle has made his mark on Sanibel Island and beyond in ways uncountable. His generosity in creating stunning wildlife sculptures has benefited organizations from FISH and SCCF to SanCap Cares and Alliance for the Arts.

He has indicated often that the J.N. “Ding” Darling National Wildlife Refuge, however, is the cause closest to his heart, and has donated sculptures through the years valued at more than $2 million to support the refuge.

“Jim’s contributions to ‘Ding’ Darling are immeasurable,” said Birgie Miller, executive director of the “Ding” Darling Wildlife Society-Friends of the Refuge (DDWS), the refuge’s nonprofit arm. “He served as board president for many years, has volunteered since 1997, and has donated a number of sculptures and his famous Sprankle Feather Club pins for charity auction. In addition, a showcase full of his hand-carved duck decoys, each one of which sold for sponsorship dollars, and a whole flock of his bird sculptures decorate and educate at our ‘Ding’ Darling Visitor & Education Center.”

Longtime islanders and friends of Sprankle, Donna and John Schubert decided it was time the refuge and island showed proper gratitude for all that Sprankle has done to support island charities. They have made it possible to name a forthcoming trail at the refuge’s newest Lee Anne Tauck Conservation Tract in his honor, the Jim Sprankle Nature Trail.

On March 25, the Schuberts, with refuge and DDWS staff and board members, surprised Sprankle with the unveiling of a sign that dedicates the future trail in his honor. The sign is located at the 68-acre tract that DDWS, the refuge, and Lee County Conservation 20/20 worked together to acquire in 2017. DDWS raised $3 million in private funding to complete the $6.5 million Lee County contributed. For its part, the refuge will maintain and restore the wetlands and uplands habitat, home to myriad at-risk species.

The habitats serve as an important wildlife corridor between the refuge and other established conservation lands and as a tool for improving local water quality. From the beginning of its acquisition campaign, “Ding” Darling envisioned restoring the property – which had been city-approved for a development of 29 homes – as wetland habitat for various species of wading birds and other wildlife.

“This was the second such partnership with Lee County 20/20,” said John McCabe, past DDWS president, who led the capital campaigns to purchase it and an earlier 6.56-acre parcel at Woodring Point in 2013. “Jim, with his incredible community engagement, was instrumental in helping us raise funds for both acquisitions to be preserved in perpetuity.”

“Now that we have accomplished our preservation goal at the Wulfert Bayous, renamed for major donor Lee Anne Tauck, the refuge will enter into its restoration phase,” said current DDWS president Sarah Ashton. “Our friends group paid for consultants, scientists, and a professional federal grant writer to assist the refuge in submitting and ultimately securing a $5.3 million grant from the National Fish & Wildlife Foundation in 2019 to begin work on restoring the 16 acres of mangrove wetlands for a bird rookery.”

The grant came from the NFWF Gulf Environmental Benefit Fund aimed at restoring bird populations affected by the catastrophic BP Deepwater Horizon Oil Spill in 2010. The rookery will protect impacted species such as roseate spoonbills, white ibises, brown pelicans, wood storks, and a number of egrets and herons.

To support the planning for the first phase of restoration, DDWS is sharing with the refuge the cost of hiring a staff biology technician to assist with surveys and other studies in the wetlands as “Ding” Darling puts the project out to bid to engineering firms.

Refuge staff believes the wetlands restoration will take several years, after which it will begin work on the tract’s uplands habitat – home to gopher tortoises, bobcats, and other species. Part of that phase-two restoration will include the design and development of a limited public access trail, the Jim Sprankle Nature Trail.

“We don’t yet know what that trail will look like, but we do know it’s a fitting tribute to Jim Sprankle, who has done so much for conservation on Sanibel,” said Miller. “A big thanks to the Schuberts, who rightly saw that Jim deserves a permanent, visible reminder of his contributions and want to encourage others also to support conservation and habitat protection for future generations. The Sprankle Trail will forever recognize a man who deeply loves the refuge.”

“Without philanthropic support, protection of this property would have never happened, and we would be looking at 29 homes and increased habitat degradation,” said Ashton. “Island residents, visitors, community leaders, and elected county officials understand the importance of protecting what land is left on Sanibel, Captiva, and around the world, and this is a perfect example of working together, leveraging support, and protecting vital and important habitat for our wildlife and our water quality.”

For more information on supporting the refuge and conservation through DDWS, contact Miller at 239-472-1100 ext. 232.