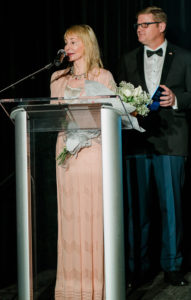 Named for Marilyn Smith’s vision and inspiration in creating the museum, Matt Johnson, Executive Director of the IMAG, and its Board of Directors conceived the Marilyn E. Smith Inspiration Maker Award to honor and acknowledge Mrs. Smith and, in subsequent years, those who would make a significant and lasting difference for others at the IMAG with their gifts of inspiration, imagination, and innovation.

Although the IMAG History & Science Center had its beginnings as the Imaginarium in July of 1995, Ms. Smith originally had the idea to create an interactive children’s museum in 1989.  Then in the early 1990’s, a group of volunteers including Marilyn Smith, Mayor Wilbur Smith, Councilwoman Veronica Shoemaker, and others imagined the museum on an industrial site, previously the City of Fort Myers water treatment facility, vehicle fleet fueling operation, and a coal-to-gas conversion plant.  In 1994, with funding secured, Mrs. Smith’s vision started to become a reality; the water tower was painted yellow, red, and blue emblazoned with the Imaginarium logo, ground was broken, and construction began on the Imaginarium Hands-On Museum to open the next year.  Later, following a merger with the Southwest Florida Museum of History in 2017, the Imaginarium was renamed the IMAG History & Science Center.

Bringing inspiration to life for more than twenty-five years, the IMAG engages, energizes, and excites children, families, and guests of all ages with hands-on activities, interactive exhibits, history displays, aquariums, an animal lab, and more as well as special offerings like Camp IMAG, homeschooling and scouting programs, fieldtrips, and workshops to name a few. Through the lenses of history and science, the IMAG creates inspiring, imaginative experiences for guests to explore and understand the rich culture and habitat of Southwest Florida by focusing on STEM (science, technology, engineering, and mathematics) as well as history, humanities, and the arts.  The making of the Marilyn E. Smith Inspiration Maker Award itself is very special and unique in that it was designed and fabricated in the Rist Family Foundation FabLab at the IMAG using state-of-the-art technology and tools stemming from Marilyn Smith’s original vision to create hands-on learning experiences.