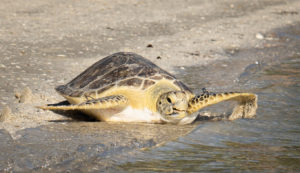 The Clinic for the Rehabilitation for Wildlife (CROW) released two Green Sea Turtles and a Kemp’s Ridley Sea Turtle this morning on Captiva.

New Wave Eco Charters rescued the first Green Sea Turtle (21-6322) on December 26, 2021 after it was found floating and unable to dive below the surface near Blind Pass on Sanibel. The second Green Sea Turtle (22-607) was admitted from Fort Myers Beach on February 20 after it was found lethargic and floating in the Marina Waterway. The Kemp’s Ridley Sea Turtle (22-932) was also admitted from Fort Myers Beach on March 17 after some fishermen accidently hooked the turtle.

Upon admission to the clinic, the Kemp’s Ridley Sea Turtle (22-932) had a large fishing hook embedded in its mouth. Hospital staff successfully removed the hook, but due to location, there was some damage to the soft tissues in the mouth. The Kemp’s was moved to our outdoor turtle tanks to continue with supportive care and close monitoring.

About Clinic for the Rehabilitation of Wildlife (CROW)
Established in 1968, the Clinic for the Rehabilitation of Wildlife (CROW) is a teaching hospital saving the sick, injured and orphaned native and migratory wildlife of Southwest Florida and beyond. Through state-of-the-art veterinary care, public education programs and an engaging visitor center, CROW works to improve the health of the environment, humans and our animals through wildlife medicine. For more information, or to plan your visit, go to www.crowclinic.org. If you find an animal that is in need of help, call (239) 472-3644 ext. #222.