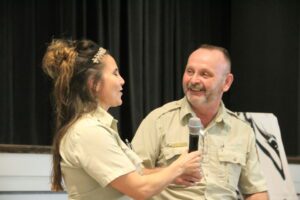 “I will really miss working with you and feel like I am leaving family,” Combs, who worked several of his years at the refuge as volunteer coordinator with visitor services, wrote in an announcement email. “Thank you for all of the good times at the refuge and for being such good friends.”

“For over two decades, Jeff has served the visiting public by providing an informative, educational, and enjoyable experience to so many,” said Acting Refuge Manager Kevin Godsea. “Either directly or indirectly, the number of people who benefited from his service is immeasurable. We will miss him.”

Combs started working at “Ding” Darling on Dec. 8, 1996, as an interpreter. He transferred to the Assateague Island National Seashore to work for one summer in 1997, but returned that fall permanently. During his years at the refuge, Combs filled roles as fee collector, educator, and overseer of permits, contracting, and concessions. He also assisted the maintenance and biology departments.

He will be most remembered for his position as volunteer coordinator, however. Training, scheduling, and working with more than 300 volunteers brought the respect of everyone associated with the refuge. He was protective of his worker bees, and each year was in charge of planning a volunteer holiday party and end-of-season awards luncheon.

“Jeff is like this refuge icon,” said Ranger Toni Westland, who has worked with Combs for 10 years. “The volunteers just love him. And he is an expert on so many facets of wildlife and refuge management. The refuge will definitely be a different place without Jeff Combs.”

“Jeff was absolutely dedicated to making sure every one of the refuge’s nearly one million visitors each year had the best experience possible,” said Birgie Miller, executive director of the “Ding” Darling Wildlife Society-Friends of the Refuge. “He is one-of-a-kind – tough shoes to fill.”