Most Loggerhead Nests Ever Documented on Sanibel & Captiva 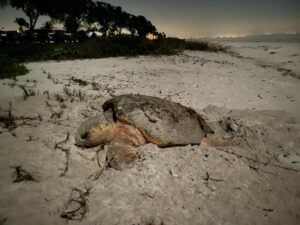 It’s official – 2020 is a record-breaking nesting season for loggerhead sea turtles on both Sanibel and Captiva.

“This season’s nest counts are very encouraging and are a testament to over 60 years of conservation work on Sanibel and Captiva, as well as the entire state of Florida and the surrounding waters,” said SCCF Coastal Wildlife Director Kelly Sloan. “However, it’s important to keep in mind that monitoring population trends based on nest counts is very complicated.”

Sea turtles have complex life cycles – females lay more than one nest per year and do not typically reproduce every year, so even when the population is stable, it’s natural to see fluctuations in nesting from year to year.

A 2019 review by FWC revealed that there was no evidence for an increasing or a declining trend in the breeding female population from 1998-2018. The loggerhead population is still fragile, facing many threats, including bycatch in fisheries, habitat loss, pollution, and climate change.

After the catastrophic red tide that occurred during the 2018 nesting season resulted in more than 100 strandings of loggerheads, there was concern that the number of adult turtles lost would have a negative impact on the 2020 nesting season.

Even though the 2020 nesting season is a record for our islands, many questions remain concerning the long-term effects of the unprecedented 2018 red tide event.

The team is currently conducting a comprehensive research project to better understand how the 2018 bloom affects the health of the surviving turtles and whether they may transfer the toxins to their hatchlings.

Based on tagging data, 17 of the turtles SCCF’s team encountered this year nested during the 2018 red tide. Nineteen turtles nested in 2016 and may be on a three-year remigration cycle, suggesting that they weren’t nesting or in nearshore waters in 2018.

“We may yet even see more turtles from 2018 nesting in 2021,” said Biologist Jack Brzoza. “We are cautiously optimistic that the record nesting will continue into the future and we’re excited to see what awaits our islands in 2021.”

To report any issues with nests, nesting turtles, or hatchlings on Sanibel or Captiva, please call SCCF’s Sea Turtle Hotline: 978-728-3663. SCCF (Sanibel-Captiva Conservation Foundation) is dedicated to the conservation of coastal habitats and aquatic resources on Sanibel and Captiva and in the surrounding watershed.