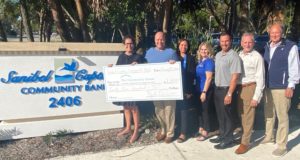 Throughout its ninety-five-year history, the Sanibel Community House has received generous support from the Island business community, in addition to the membership fees and private donations made directly by the residents of Sanibel and Captiva.  Even in the 1920’s and 1930’s when Sanibel’s roster of businesses was still quite small, the few that existed did their part to help the Community House get started, recognizing its importance as a core non-profit resource for our growing community.

An early example of that business support came from Frank Bailey, founder of Bailey’s General Store and the Sanibel Packing Company.  Mr. Bailey played a central role as SCA Treasurer and oversaw construction of the original Community House building, beginning a long relationship between Bailey’s and the Community House.   Over the years, many other businesses have joined the group of corporate supporters, a list that includes merchants, restaurants, realtors, and professional service providers.

In addition to the corporate sponsors, Community House volunteer Terri Kuhl, who chaired the recent Cookie Exchange at the House, has stepped up as a Founder Level $10,000 sponsor of the event.  The themed Anniversary Celebration will include a gourmet six-course dinner, plus live music and dancing, all in the spirit of the community gatherings of years past.

To provide a safe environment for the event, attendees are being asked to provide a COVID vaccination record or evidence of a negative COVID test within 72 hours of the event.  Documentation can be provided in advance by emailing a copy to Exec. Dir. Teresa Riska-Hall at sanibelcommunityhouse.net,  or can be presented at the door prior to the event.