Offshore Sailing School President and CEO, Doris Colgate, to be Inducted to The National Sailing Hall of Fame, Class of 2022 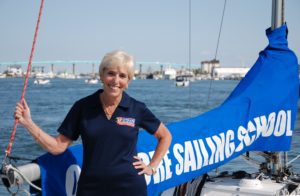 The National Sailing Hall of Fame’s (NSHOF) Class of 2022 inductees includes Offshore Sailing School President and CEO, Doris Colgate, who resides in Fort Myers, Florida, where the company headquarters is located. Colgate joins 12 other sailors who have had significant impact in the sailing industry.

Doris Colgate’s interest in sailing began in the advertising department of Yachting Magazine in New York City. Colgate went on to found the National Women’s Sailing Association and the Women’s Sailing Foundation, dedicated to enhancing the lives of women and girls through education and access to the sport of sailing. Colgate authored SAILING: A Woman’s Guide, published in 1999 by International Marine/McGraw Hill. OFFSHORE High debuted in October 2021. The biography about the Colgates and Offshore Sailing School was written by Herb McCormick. Colgate has received numerous sailing industry, business, and tourism awards, and has served on nearly every sailing industry organization’s Board of Directors.

NSHOF inductees were nominated by sailors from across the United States. Nominees must have made a sustained and significant impact on the growth and development of the sport in the United States at a national or international level.

Offshore Sailing School was founded in 1964 by Olympian, America’s Cup Sailor and National Sailing Hall of Fame Inductee, Steve Colgate. Doris Colgate joined Steve in running the Company in 1969 and both are still actively engaged in the business. Visit https://www.offshoresailing.com/.